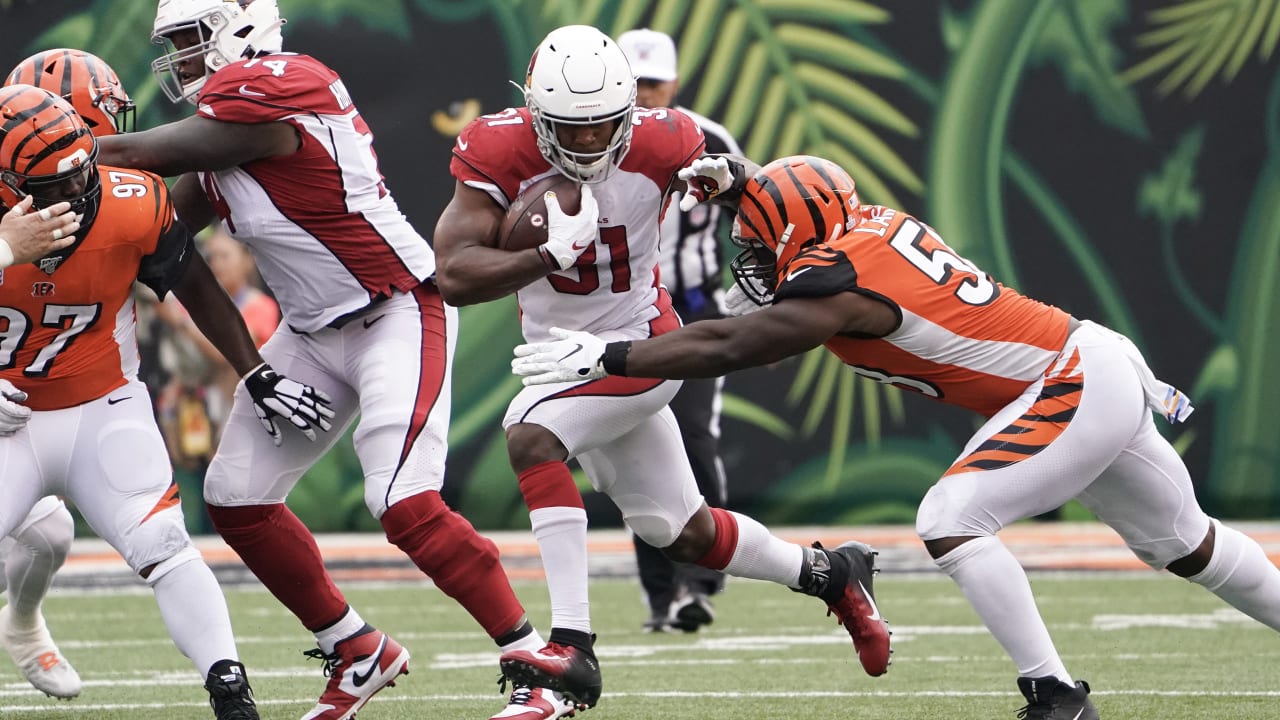 Johnson shrugs off whether he’s getting carries or targets – “Wherever I’m needed,” he said – but he was a guy the Cardinals were going to need to lean on for the offense. With Kirk out with an ankle injury (Kingsbury said Kirk might be able to practice this week), it’s arguable that the Cards’ best two offensive weapons are Johnson and backup running back Chase Edmonds, who gained 68 yards rushing on eight carries Sunday and added another three receptions.

Kingsbury said Edmonds has “earned” playing time, and that the Cardinals “are better when he is on the field, and David are on the field.”

With the way Johnson and Edmonds and quarterback Kyler Murray (a team-high 93 yards rushing Sunday) carried the ball, it would seem the Cards could use that blueprint more often. Kingsbury definitely changed his approach in Cincinnati and with Kirk sidelined, getting tight ends Charles Clay (44 snaps) and Maxx Williams (43) more offensive work, and dialing back of all people, Larry Fitzgerald, who had 57 snaps – 74 percent of the plays.

Kingsbury wasn’t committing to anything, however.

“We will change up as much as we need to change up to try and be effective offensively,” Kingsbury said, noting that the big running statistics had more to do with the Cardinals playing with a lead. “We’d like to be more balanced, mix things up, and we’ll see if that continues.”

It would help if Johnson is healthy to do so. If he can’t play this week, Edmonds would slide into a much bigger role, although the Cardinals have just one other running back on the roster right now – D.J. Foster – and it would seem likely they would consider signing another body this week, even if it is for the practice squad.

“If my number is called, I’ll try to make plays for this offense,” Edmonds said Monday. “You’ve got to come in and the standard is the standard. I pride myself on that. David is a mannequin. He’ll be fine. I’m sure they are just being cautious.”

Kingsbury said starting cornerback Tramaine Brock will have to be monitored this week after hurting his shoulder, but his status is up in the air. As for Kirk, Kingsbury reiterated he doesn’t want to rush the receiver back.

“I like the progress,” Kingsbury said. “We’re going to try to get as much as we can out of him, but we’re going to be safe at the same time.”

Tags: back but johnson

Matt Burke says Brandon Graham has been playing at…

Ben Roethlisberger’s 3-Pick Day ‘Nothing To Be…