KANSAS CITY, Mo. — Many of his teammates were busy celebrating a crucial Week 13 victory over the Oakland Raiders that in effect locked up a fourth straight AFC West championship for the Kansas City Chiefs, but safety Tyrann Mathieu was in his corner of the locker room looking ahead.

Sounding more like a coach than a player, Mathieu sized up an even bigger game and a meatier opponent in the Chiefs’ Week 14 matchup with the New England Patriots.

“It starts with me this week in practice, getting our guys ready, setting the tempo early in the week, letting them know we’ve got a big game this week.”

Mathieu did it well enough that the Chiefs were able to do something they couldn’t do in two tries without him last season: They beat the Patriots, a win that gave them a tiebreaker over New England and, when everything fell into place in Week 17, a first-round playoff bye.

The Chiefs had high expectations for Mathieu, 27, after acquiring him in free agency this offseason. They signed him to a three-year, $42 million contract, after he had played a season with the Houston Texans, the Chiefs’ opponent in the divisional round of the playoffs (3:05 p.m. ET, Sunday, CBS).

He met those expectations, earning first-team All-Pro at defensive back and second team as a safety.

The Chiefs knew from his past stops in Arizona and Houston that he would be someone others in the locker room would look and listen to in good times and bad. But they weren’t quite expecting Mathieu to come in and take over the way he has in Year 1. Coach Andy Reid called the phenomenon extraordinary.

“This organization was blessed to have Eric Berry … a great leader, tough, all those things,” Reid said. “Before that I was with Brian Dawkins. I’ve been lucky to be around some really good safeties. They’re all different in their own way but they’re all great football players with great instincts and good leaders. They lead a different way.

“This kid here, he’s a special kid. He’s not the biggest guy. You’re not looking at one of those huge safeties but, man, is he a good football player. He just gets it.”

Mathieu walked into a Chiefs locker room that had lost some of its veteran defensive players and longtime voices in Berry and linebacker Justin Houston.

“I truly feel like they brought me here, obviously, to make plays, but to kind of set the tempo and set the energy in the building,” Mathieu said. “I’ve always been a team guy. I feel I can go into any locker room and fit in for the most part, really relate to the most of the guys in the locker room. That’s all I tried to do here is come in, play my role, be a veteran and be a leader on the defensive side and just try my best to kind of bring the team together and keep the team together whether things are going good or bad.

“The first thing with leadership is you have to understand your surroundings, your environment and the kind of people you’re dealing with day to day. Here we had such a young team, such a vibrant team with a lot of different personalities. I’ve just tried to be myself.”

One of his first gestures after signing with the Chiefs was small but telling: Mathieu was the first player to greet the team’s other major offseason acquisition, defensive end Frank Clark, after he arrived in a trade with Seattle.

During offseason practice and training camp, Mathieu solidified himself as the defensive leader.

“He’s the glue,” defensive coordinator Steve Spagnuolo said. “He’s the guy that can get in the huddle in practice and say, ‘Hey, we need to step it up.’ You need guys like that. That stuff, I value as a coordinator. It makes my job a lot easier.”

Spagnuolo relayed a conversation he had with an old friend who had coached Mathieu before the seventh-year safety signed with the Chiefs.

“He said something to the effect, ‘He changed the building the minute he walked through the door,'” Spagnuolo said. “It just stuck with me as we evaluated the process.

“That kind of rang true. That’s the kind of guy he is. He’s dynamic, has a lot of energy. Guys gravitate to him. He’s serious about what he’s doing. When you’re a coach and you have a player like that, that helps.”

Mathieu immediately became the player the Chiefs gather around at the end of their pregame warm-up, an honor usually reserved for someone who has been with the team for some years.

“Everything that he does and everything he that he says, he speaks it into existence,” Clark said. “I love hearing him speak to us on Sundays because it’s a different type of motivation. He’s going to bring the best out of everyone around him, whether you’re a first-year guy, a fifth-year guy, a Pro Bowler, an All-Pro, Super Bowl-winning quarterback. … He’s a motivator.

Jeff Saturday believes Deshaun Watson and the Texans will have their hands full with the pressure the Chiefs’ defense will bring in their playoff matchup.

He’s also a teacher. Mathieu had a role in the development of rookie safety Juan Thornhill, whose season ended when he tore his ACL in the final regular-season game against the Los Angeles Chargers but showed promise up to that point.

“He just told me to be myself,” said Thornhill, who had three interceptions this season and returned one for a touchdown in the December win against the Raiders. “When you be yourself, you make more plays. I’m just going out there and having fun and that’s probably the biggest tip he’s given me all year.

“The guy is a heck of a player. I wouldn’t be where I am now if it wasn’t for him. He’s always giving me little, small tips that help me become a better player. He’s taught me a lot.”

On the field, the Chiefs have asked much of Mathieu. He lined up as a slot cornerback on 411 snaps, safety 359 and linebacker 224 times. He wound up leading the Chiefs with four interceptions.

“He wears a lot of hats,” defensive backs coach Sam Madison said. “Early in the year, we just wanted to put guys in situations to be comfortable. He understands the defense. … Since he’s been at LSU, he’s played all over the place. It was just a natural fit for him. He’s taken to it very well. I talked to him a few weeks ago, telling him just to be patient and try not to go out there and find the plays [but] let them come to him. That’s what he’s been doing.” 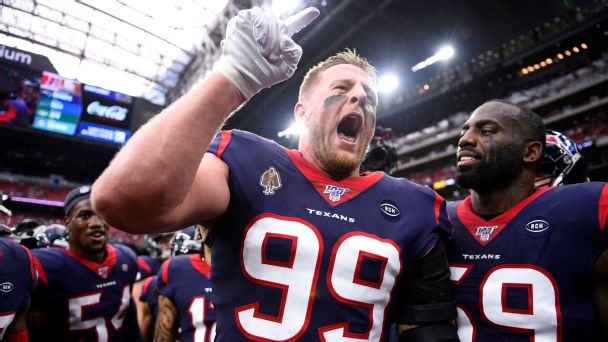 • How Watt’s return gave Texans a spark
• What breakout means for Vikings’ Cousins
• Packers: From injury-prone to injury-free
• Rhule a front-runner to be Giants coach
• Bills gush about QB Allen after loss

Asked whether the Chiefs were concerned about overloading Mathieu, Madison said: “We thought about it. But when that kid comes into the meeting rooms, he has all the answers that we ask. When we threw him out there, it doesn’t really seem to bother him. We knew all the different positions that he played previously [and] we’re just trying to apply it to what we have. He wants to be out there. He loves football. When you have players like that, you try to give them as much as possible to see what sticks and what falls by the wayside. A lot of this stuff is sticking.”

Mathieu was once one of the fastest players on the field. He was a top punt returner earlier in his career. But after having two serious knee injuries, he said he’s not the same player he once was athletically.

But he’s having a bigger impact for a team that needed it — the Chiefs have allowed an NFL-best 11.5 points per game since Week 11 a season after struggling — on and off the field.

“I’ve grown,” Mathieu said. “I’m in my seventh year now and it’s bigger than me. It’s about me playing well but getting other people around me to play well.

“One of the best decisions I made was coming here. It’s been going well.”

Tags: am amp he

Bills not living in regret despite trading Patrick…